Service is really at his heart 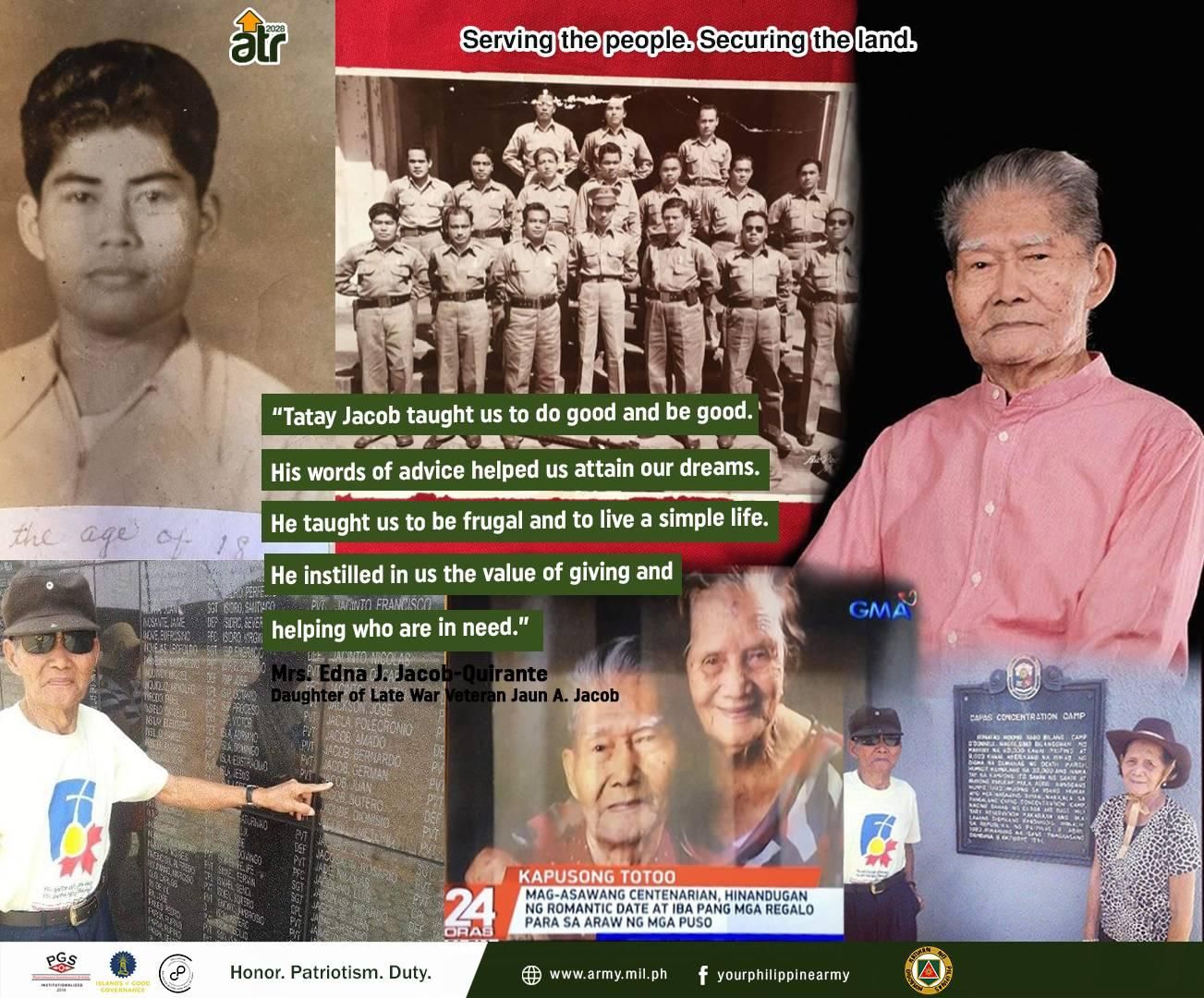 This is how his surviving wife and children recalled fond memories of the late war veteran Juan A. Jacob. Private Jacob, who once served under the United States Army Forces in the Far East (USAFFE), passed away on March 28, 2022, less than a month shy of his 103rd birthday. He was among the oldest living Filipino World War II veterans, prior to his death.

War veteran Jacob was among the thousands of gallant Filipino youth who heeded the call to defend the country from Japanese invaders at the onset of World War II in the Pacific Theater. At 20 years old, he was called to military training at the then Camp Murphy, now called Camp Aguinaldo, the Armed Forces of the Philippines' general headquarters. After months of rigorous military training at the Santolan Baracks (Engineering Department) of Camp Murphy, he was enlisted as part of the Alpha Company, 52nd Engineer Battalion, 51st Infantry Division of the USAFFE.

War veteran Jacob was among the estimated 75,000 Filipino and American troops who were forced to walk for more than a hundred kilometers to the concentration camp in O'Donnell, Capas, Tarlac after the Fall of Bataan in April 9, 1942. He survived the inhumane conditions at the concentration camp, and eventually escaped to became a guerrilla fighter until the Allied Forces' liberation of the Philippines in 1945.

War veteran Jacob continued his secondary studies as the country started to rebuild from the ashes of war. To make ends meet, he also worked as a nighttime shift security guard at the Santa Mesa, Manila-based National Rice and Corn Corporation. In 1947, he married his fellow Catanduanes-native Francisca Velasco Vega. The couple was blessed with seven children.

“Tatay Jacob taught us to do good and be good. His words of advice helped us attain our dreams,” Mrs. Edna J. Quirante, Tatay Jacob’s fifth child recalls.

Service is really in the heart of war veteran Jacob. A decade after World War II, he pursued his dream to become a teacher and eventually completed an Education degree from the Arellano University in Sampaloc, Manila. This paved the way for a teaching career in his hometown of Panganiban, Catanduanes where he taught grade school and high school students from 1956 to 1979. The war veteran also went on to serve as municipal councilor of Panganiban town from 1980 to 1986, right after his fruitful teaching stint.

“Papa taught us to be frugal and to live a simple life. He instilled in us the value of giving and helping others who are in need,” Mrs. Quirante shares, recalling fond memories of her late father. She says that her father, who also lived in California, U.S.A. for a time to process his veteran pension from the American government, worked as a laundromat aide wherein he received commendations for his honesty and integrity at work. “During his free time, he would help homeless people through his volunteer work for the Salvation Army,” recounts Mrs. Quirante.

War veteran Jacob was a survivor through and through. His will to fight is evident even in the sunset years of his long and eventful life. The war veteran had survived colon cancer in 2012, and even recovered from Covid-19, and pneumonia last year.

“He may have passed on but his lessons and his legacy of service to our country and the people will remain,” Mrs. Quirante shares. #